Our next walks venue will be

in the heart of the Peak District
on

The village of Eyam (pronounced Eem) which sits snugly in relative isolation deep in the heart of the Peak District surrounded by a rugged landscape of limestone hills and dales and sheltered from the north by the dominating prominence of Eyam Edge, is perhaps the most well documented and most visited of all Derbyshire's villages.

It's inhabitants are justifiably proud of their village and it's place in history for Eyam is known famously as the "˜Plague Village' - and thousands of visitors flock here every year from all over the world, fascinated by the valiant story of sacrifice which the village has to tell. More....


There will be three Walks as normal.

The public toilets in the car park are excellent and FREE

Posted by 'Unknown' at 23:22 No comments: Links to this post 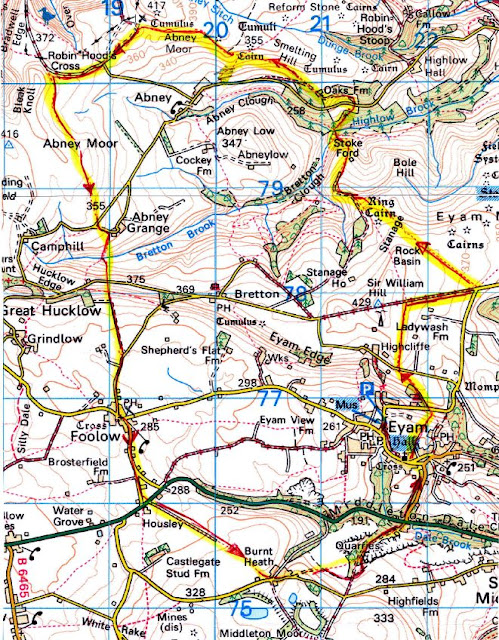 On leaving the coach park, with its free toilets, we walk back through part of the village to the church, stopping momentarily in front of the original now pretty “plague cottages” in the process. 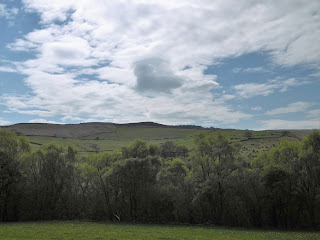 Then, striding through the churchyard we start climbing up out of the village towards Eyam Moor to the North.  It is a short but steep-stepped climb but you will have seen some affable, amiable alpacas to set you on your way!  At the ring-cairned peak of the moor you should get a fantastic view of the whole of Stanage Edge to the north-east.  We then descend into a very picturesque wooded valley towards Stoke Ford before climbing gently up to the grouse-filled Offerton Moor, and our eventual lunch stop. 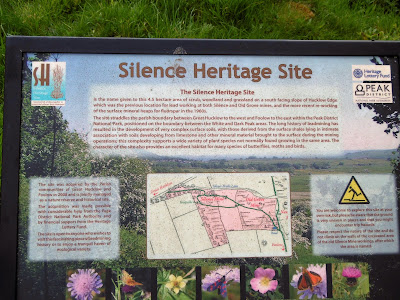 Descending then to Robin Hood’s Cross, in what is called ‘The White Peak’ area, we take a short skip across Abney Moor, then up and down a few valleys to the lovely village of Foolow.  From there, it is a 1:15 walk across farmland, a working quarry and woodlands back to the village. 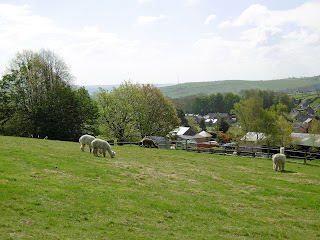 The walk is about 18.5kms [11.5 miles] but should only take about 5hrs  - even at my pace!  There are 2 steep climbs but which take only 10 mins each: one at the start out of the village and one mid-afternoon.  Right at the end, we have to climb gently back up to Eyam from Middleton Dale but, again, this will only take about 10 mins, and there’s a beer at the end of it!   So, not too serious by any means, promise!!  If windy, the moors will be bleak and chilly so a good windproof jacket would be a bonus.  An invigorating walk!.

Posted by Holy Trinity Fell Walking Club at 22:00 No comments: Links to this post

This is an interesting walk ‘off the beaten track’ as we traverse ancient woodlands, dance with a Highlow Brook and wander over open moorland listening to beautiful birdsong, mainly on natural pathways which have probably been there for centuries, but first we have to tackle Eyam Edge.
This isn’t a difficult ‘B’ Walk, with gentle slopes as we traverse the boundary of the White peaks, but we do start with a steep climb of 400ft over 0.5mile up Eyam Edge. We will take this at a steady pace, waiting for the slowest, but after a rest we will be ready for the rest of the walk. 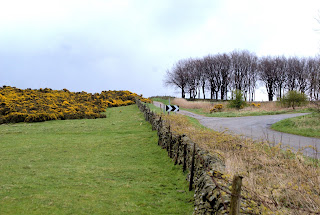 I have decided not to go to the Barrel Inn at Bretton as we would lose too many walkers so we veer over to Bretton Clough and some delightful pathways through ancient woodland, slowly descending to Stoke Ford but noticing Gotherage Barn Ruins on the way. We may have lunch at the Ford.As we leave the ford, notice the footpath sign erected in 1939 and still clearly showing the way – for us uphill to the left. We are on the lower slopes of Eyam Moor but will have some excellent views, particularly of Hathersage as we approach Tor Farm at Hazelford. I wonder how big the new born lambs will be now? 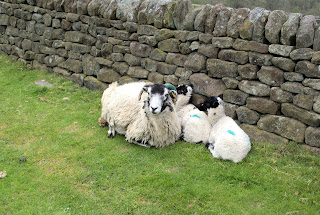 A short steepish climb now on a minor road to Leam where we join a footpath across Eyam Moor. Keep an eye open for the variety of ground nesting birds and wild flowers. Eventually we can see the Wireless Mast which indicates that we are getting nearer Eyam and Sir William Hill Road (not the Bookie, Baddeley's guide to the Peak District, published in 1899, claimed it may have been named after Sir William Peveril, son of William the Conqueror, but this is far from certain)
We walk along this road, which was abandoned by the council many years ago and this shows as it is a very rough rocky route. Turning off to a footpath, we head down Bole Hill, passing Ladywash Mine, now closed and boarded up but was used for many years to extract iron ore and then Fluxite.
We now have to descend Eyam Edge, making sure we take the correct route to come out opposite the next pathway down to the village and refreshments or a browse of the history of this famous place, including Riley’s Graves. 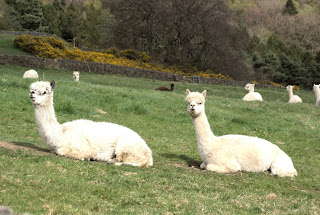 Posted by Holy Trinity Fell Walking Club at 21:00 No comments: Links to this post


This walk starts in Eyam where the coach park is at the top of the town and some 4/500 yards from the centre where the tea room and the Miner's Arms are situated.  The trail, however, leaves shortly after the coach park.   To have a coffee/teacake before we start would mean walking from the coach to the tearoom and then backtracking to the point where we leave Eyam.   This will add some 1/2 mile to the walk which, I guess, some will want to do while others do not.   So I will take a vote as we are ready to set off and we will follow the will of the majority.  The walk is 6 miles long but could be cut by 1 mile.

The walk is principally over pasture and stiles (some harder than others) with a few gradients but nothing to deter a fit C walker.  There are constant lovely views all around as we cross the fields, at one stage skirting round a disused quarry.  The trail passes wide of Foolow going towards Stanley House where we will turn to start back to Eyam but, this time, going through the charming village of Foolow. After a short distance on the road back to Eyam,  the route leads across the fields and into Eyam and the coach park.  Again, if you want tea/a drink after debooting you will have to repeat the process above.
Distance  6 miles but could be cut by 1 mile.
Posted by Holy Trinity Fell Walking Club at 20:00 No comments: Links to this post